based on 14 reviews
Free cancellation

Your tour will begin at St. Paul’s Chapel on Broadway, a building considered to be the oldest public building still in use. During the 9/11 attacks, the Chapel miraculously survived without even a single broken window and served as a sanctuary for refuge and shelter throughout the aftermath. Now, it stands as a place of tribute for those around the world to commemorate first responders and innocent civilians, containing mementos and paraphernalia of support for the city.

Next, you’ll walk to the Firefighter's 9/11 Memorial Wall located at FDNY Engine 10 and Ladder 10. There, you’ll see a memorial dedicated to the city’s 343 first emergency responders who risked their lives on the day of the attacks. From here, you’ll head towards the 9/11 Memorial. There, you’ll have the opportunity to see the new Freedom Tower and World Trade Center.

The final stop on the tour will include the One World Observatory or the Freedom Tower. This journey begins at the Welcome Center. You’ll hear stories of the people who built the tower through a video montage and travel in the “Sky Pod” elevator which shows you a virtual time-lapse of the city as you ascend. Watch the fascinating See Forever Theatre before you descend to the 100th floor to the main observation deck where you’ll have a panoramic view of New York City’s incredible skyline.

Please meet your tour outside of St. Paul's Chapel, 209 Broadway. Arrive 15 minutes before. Look for the tour guide or representative, who will be wearing an orange lanyard or holding an orange flag. The tour ends at 9/11 Memorial, about 4 blocks from the meeting location.

What to remember
Read more
When
Read more
Provider
info@newyorktour1.com
Booking fee
Good news! No extra fees are applied to this booking.
Cancellation policy
Receive a 100% refund if you cancel up to 24 hours before the experience begins. 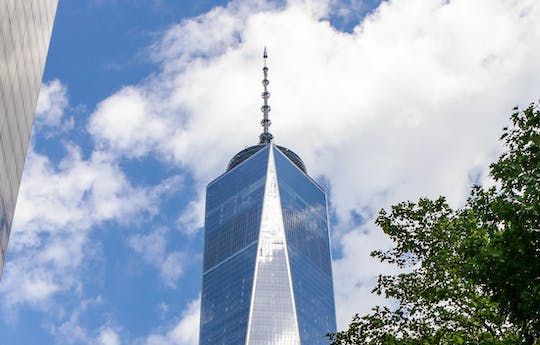