The Metropolitan Museum of Art is one of the greatest museums in New York. Your trusty and knowledgeable guide will escort you through the museum tour that will enlighten you with facts on history and works of art. The Met houses objects from Ancient Greece and Egypt and modern art from Europe. The tour starts off at the Great Hall before moving to the museum’s most notable galleries. With stops at the Medieval Gallery, the American wing, and the European wing you’ll see and learn about various iconic painters and paintings.

After having a lunch break, it’s time for the second half of the tour at the American Museum of Natural History where it houses the world’s most enthralling objects. This tour will take you to all 28 buildings that comprise this famous museum. Your guide will show you around the halls filling you in on all the main points. The museum encompasses all of Earth’s history, and you’ll begin with the museum itself, learning about the Roosevelt Rotunda. Your guide will tell you about giant African mammals, take you through dinosaur exhibits, take you down under learning about ocean life, and learn about National Parks in the United States and their native mammal inhabitants. Lastly, visit the Rose Center for Earth and Space for a tour finale that is out of this world!

Please meet by the Information Desk in front of the Egyptian Pharaoh statue, in the Great Hall of the Metropolitan Museum of Art. 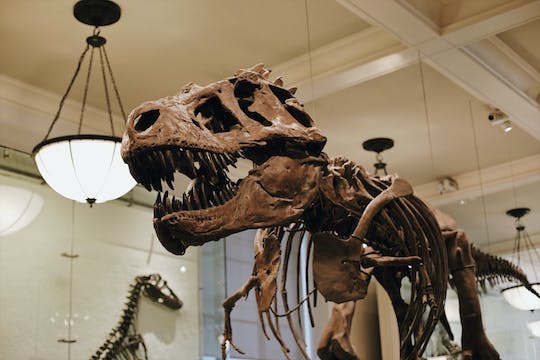