The Royal Abbey of Our Lady of Fontevraud is one of the largest monastic cities from the Middle Ages. Situated in a green valley by the Loire River, t...

In the top 5 attractions for Saumur 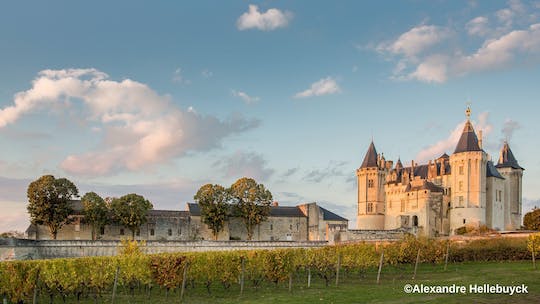 Entrance ticket to Castle of Saumur

Book your entrance ticket to Castle of Saumur and discover a magnificent piece of jewelry straight out of the late Middle Ages.

Saumur
View all experiences in Saumur

The Royal Abbey of Our Lady of Fontevraud is one of the largest monastic cities from the Middle Ages. Situated in a green valley by the Loire River, the Abbey was founded in 1101 by the itinerant preacher Robert of Arbrissel. Listed as a Historic Monument in 1840, the Abbey is also recognized, together with the whole Loire Valley, as a UNESCO World Heritage Site since 2000.

Throughout the centuries, it hosted members of the monastic Order of Fontevraud, a mixed community of both men and women, it became the home of the Queen of France Eleanor of Aquitaine, and it was turned in 1801 into one of the toughest prisons of France.

During your visit, you can explore the 13 hectares over which the various buildings are spread, stroll along the cloister, visit the chapter house or the kitchens, to relive the daily lives of the nuns. Admire the reclining effigies that adorn the nave of the Abbey Church, and see the place where Eleanor of Aquitaine, King Henry II, and their son Richard Lionheart were originally buried.