On this half day tour you'll visit Abu Dhabi, the largest of the seven Emirates and the Federal capital of the United Arab Emirates. Once there you'll find a well planned modern city with several high-rise buildings, impressive palaces, beautiful corniches and architectural mosques. Visit Sheikh Zayed Grand Mosque the most imposing religious and national landmark in Abu Dhabi to date. Then a panoramic tour of the Emirates Palace, President's Palace, the Old Fort, built in the late 19th century, making it the oldest buildings in town. Then explore the Abu Dhabi Heritage Village.

At the eastern end of the Corniche, near the port, lies Abu Dhabi's fish market and dhow wharf, offering an excellent view of the city's skyline. You'll pass through the carpet market where a huge variety of fabulous rugs from all around the world are being sold at very affordable prices. You'll stop for lunch at a hotel restaurant before returning to Dubai.

At checkout you will be asked to provide your hotel name and address for pick-up.

What to remember
Read more
When
Read more
Provider
Dadabhai Travel LLC
Booking fee
Good news! No extra fees are applied to this booking.
Cancellation policy
Unfortunately, we can't offer you a refund nor can we change or cancel your booking for this particular product, due to our partner's policy. 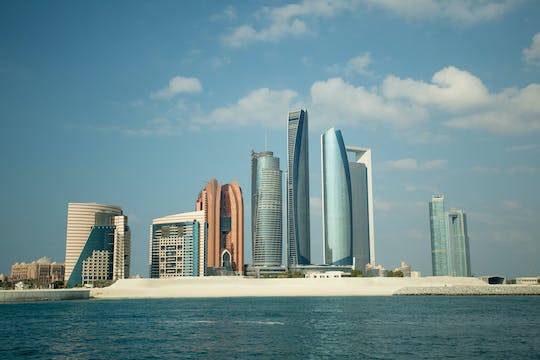 Mobile voucher accepted
from:
$ 50
Sorry, it's sold out
Unfortunately all tickets have been sold out for this event This Dubai tour puts the spotlight on two contrasting sides of the city – old and new. You'll check ... A far cry from Dubai's glitz and glam, Oman's Musandam Peninsula is a getaway to beat them all. You'...