Discover the Sacromonte Abbey; the birthplace of Christianity in Granada. Find out about the history and architecture of the abbey with an expert English speaking guide.

At the chosen time you'll meet outside the abbey (known in Spanish as the Abadía del Sacromonte) and you'll then start an hour-long guided tour around this impressive monument.

Often overlooked by tourists, this Sacromonte Abbey is one of the most important religious buildings in Granada. In fact, the relics of martyr Saint Caecilius of Elvira were found here.

You'll also visit the Sacred Caves; the most important part of the abbey. Your guide will explain to you why they are so significant as you feel the spiritually and tranquillity of the caves.

After discovering the secrets and beauty of the abbey, the guided tour will come to an end.

You can access with your own vehicle as it has free parking, by taxi or by bus. You can take the bus from Plaza Nueva, it is the C34 and you have to get off at the last stop.

When
Read more
Provider
Abadía del Sacromonte
Booking fee
Good news! No extra fees are applied to this booking.
Cancellation policy
Receive a 100 % refund if you cancel up to 1 day before the activity begins. This is a guided tour of the most important viewpoints of Granada, located in the Albaicín neighborh...

Begin your 2-hour walking tour with your guide, heading along the Alhambra walls and towers. Follow ... Don’t you have tickets for the Alhambra and you still want to visit some parts and learn something a...

No need to wait when you can skip the line to discover the most popular monument in Spain. The walki... Learn about the history of Granada on this 3-hour guided tour of the Alhambra and discover the Nasri...

Join the tour and avoid the long lines at the entrance. Discover the imperial majesty of Granada’s A... 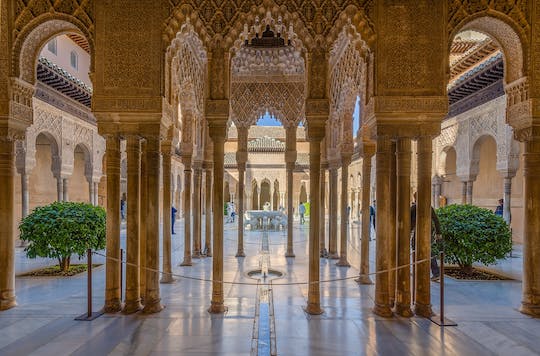 Organize your day in Granada in your own way! Walk around the Alhambra and discover its detailed Isl...

Private guided tour of the Albaicin

The Albaicin is one of the most incredible and famous neighborhoods of Granada. Get ready to discove...