Visit the Colosseum, one of the largest structures of the ancient world, where Romans once gathered to watch gladiator games, battles with wild beasts, and according to legend, sea battles. Discover how the Colosseum, a massive stone amphitheater which seated an estimated 60,000 spectators, was built in only 8 years. Your guide will tell you fascinating stories about its design and construction, its political role, the fighters and the eventual end of the games.

At the Imperial Roman Forum, your guide will bring to life mythology, popular celebrations and gods of ancient Rome. Learn how the pagan holiday Saturnalia influenced the unfolding of today's Christmas celebrations. Listen to the story of the Lapis Niger (Latin for ‘black stone’), the most ancient Latin text ever discovered in the world, housed in the foundation of a Forum column.

Discover the Temple of the Vestals, young women taken from aristocratic families to serve as priestesses of Vesta. They worked in the temple for a period of 30 years under different emperors and were regarded almost as goddesses in status. Their foremost duty was maintaining the sacred fire of Vesta which represented the heart of Rome. As legend has it, as long as the sacred flame burned, Rome would endure and be victorious.

Meeting point:
- This tour offers pick up service from Rome's accommodations. Please provide your pick up address at the time of booking
What to remember
Read more
Provider
Studio Associato Eyes of Rome
Booking fee
Good news! No extra fees are applied to this booking.
Cancellation policy
Receive a 100% refund if you cancel up to 1 day before the experience begins. 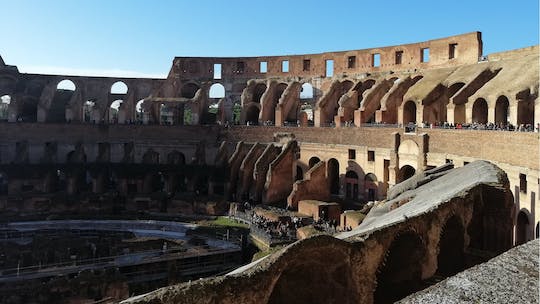