By the end of the tour you will:

At the base of the TV Tower (Fernsehturm) in Alexanderplatz. Tours meet just around the corner in front of the entrance to the tower. You will see the guides there with the large, red flags. Please arrive about 15 minutes prior to your scheduled tour

What to remember
Read more
When
Read more
Provider
Fat Tire Bike Tours Berlin
Booking fee
Good news! No extra fees are applied to this booking.
Cancellation policy
Receive a 100 % refund if you cancel up to 3 hours before the activity begins. 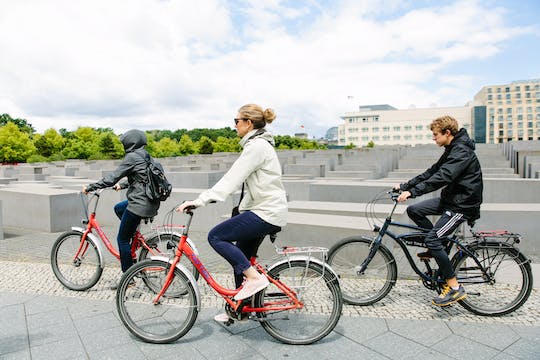 Mobile voucher accepted
from:
$ 36
Sorry, it's sold out
Unfortunately all tickets have been sold out for this event

Stranded behind the iron curtain for nearly 40 years, West Berlin developed its own unique identity ...

The East Side Gallery is an international memorial for freedom and the longest open air gallery in t... Learn more about the final battle for Berlin, the arrival of the Soviets in Berlin, the Cold War, th...

Enjoy a private history tour in the center of Berlin about the final offensive in WWII. This guided ...

Discover Berlin from a whole new perspective! Whether it’s your first time visiting or you’re an old...