This is a tour to the city of Kronstadt on the island of Kotlin, in the middle of the Gulf of Finland. Kronstad is a naval base and was at the centre of the defensie system of the harbor of St. Petersburg. During this tour you will see:

Petrovsky Dock is one of the oldest hydraulic structures in Kronstadt, whose construction was begun under Peter the Great. In the dock, ten large ships could be constructed at the same time. The uniqueness of the dry dock is that the drainage was carried out not by pumping, but by gravity. In the global network of tier posts, the Kronstadt footstock is one of the oldest.

Then you will visit the St. Nicholas Naval Cathedral, the main shrine of the city. The Naval Cathedral is a magnificent building 70 meters high, its construction took more than 10 years, from 1903 to 1915. The cathedral was built like the church of St. Sofia in Constantinople. The value of the temple is that it has no equal in decoration among the cathedrals of its time.

Island of Forts Park, which opened in 2020 and is now the largest park in Russia in honor of the country's navy. It is an open-air museum which occupies about 9 hectares. The main attraction is the Alley of Heroes of the Russian Fleet. In an interactive form, you can learn about the history of the Russian fleet from Peter I to the present day. The names of the 200 representatives of the country's naval forces are captured on the Memory Lighthouse. Here you can admire the panorama of the Gulf of Finland on a swing or use free stationary binoculars.

Meeting point:
Meet your guide at the Nevskiy Prospect metro station "Nevsky Prospect", you will find the "Turservice" Pavilion with red stickers at the corner between Dumskaya Street and Nevskiy Prospect, opposite to The Duma Tower and on the side of the Gostiny Dvor
What to remember
Read more
Provider
Турсервис
Booking fee
Good news! No extra fees are applied to this booking.
Cancellation policy
Receive a 100% refund if you cancel up to 10 hours before the experience begins. 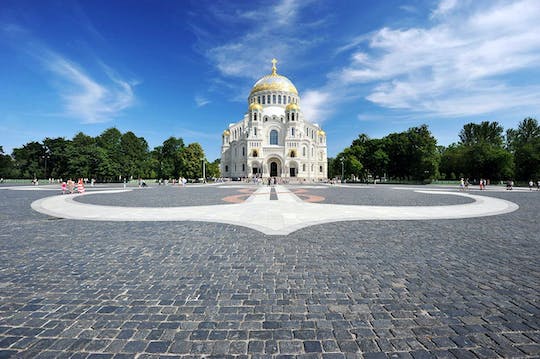 Mobile voucher accepted
from:
$11.00
Sorry, it's sold out
Unfortunately all tickets have been sold out for this event

Buy your Empire State Building tickets with us and admire NYC from the 86th-floor Observatory. Buy express pass tickets for a more efficient entry!